My quest on finding unusual uses for the Baker Street door continues (just posing Sherlock in front of it is boring, everyone's doing that) so I let Kirk and Spock have a little vacation trip!

Today I have a double feature for all the "Sherlock" fans! First, have you seen that google maps now has added inside pictures to North Gower Street? You can view Sherlock's flat in 360° and also walk into the kitchen. Here's the link:

A while ago I also saw the inside of the TARDIS when you click at the one at Earl's Court.

Secondly, in last week's "Sherlock" episode "The lying Detective" an eagle eyed fan found a postcard from "Torchwood" on the mantelpiece. Here you can see a screenshot: http://www.radiotimes.com/news/2017-01-14/did-you-spot-the-torchwood-easter-egg-in-sherlock

So of course I had to react to that! So I created this: 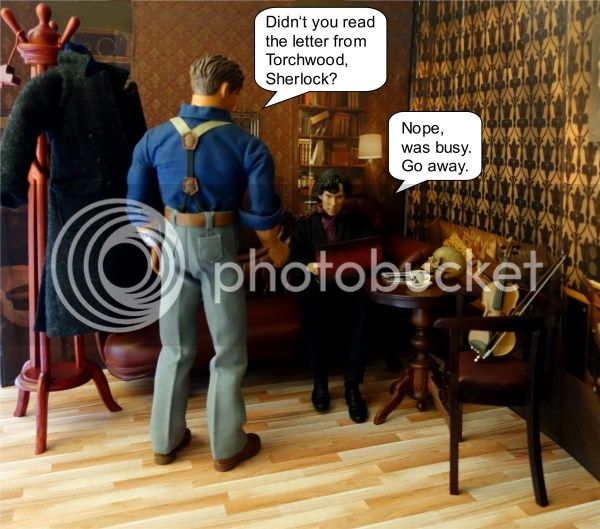 There was a new modern Winnetou three-parter on German TV over Christmas and it has brought back my love for Western film melodies. When I was a teenager I had a huge love for the Wild West. If you like famous Western film melodies, please check this playlist. It's a record that was done in Czechoslovakia in 1975 and I used to play it countless times. Such things were so rare in East Germany and I really adored it.

Listening to it right now, after all this time I still was able to sing every note and knew exactly which song would be next. Wonderful melodies played by a huge orchestra.

These are the songs:

- The Big Country (Another Day, Another Sunset)
- How The West Was Won
- Once Upon A Time In The West (Harmonica)
- For A Few Dollars More
- Mackenna's Gold
- The Good, The Bad And The Ugly
- The Magnificent Seven
- High Noon (Do Not Forsake Me Oh My Darling)
- The Fastest Guitar Alive (Rollin' On)
- The Alamo (The Green Leaves Of Summer)
- Der Schatz im Silbersee
- North To Alaska