Three weeks already since I was in London at Heroes and Villains Fan Fest. But with everything happening in the UK lately I did not feel like fannish posts. I want to show my pictures to you though, so here are the first two with Sean Pertwee and David Mazouz! Many more to come. I want to say that this convention was well organized, everything ran smoothly, even the bag checks because of hightened security. I never felt unsafe.

When I came into the room, Sean was just wiping his forehead with a handkerchief. It was very hot that Saturday morning, you can see it on my face. Later they must have found the air condition and it felt cooler. They also greeted everyone by handshake and asked how they were, that was nice! The photosession went smoothly but did not feel rushed.
I asked for the boxing pose and went into position and then kept hearing David saying beside me: "Sean, did you see the shirt, did you see the shirt!" He was really excited about it. And Sean said that yeah, he had seen it. "The Good, The Bad, The Butler!"
At the signing table I asked David how it felt having your own action figure. He said that it was awesome! I then showed him some of the action figure pictures that have Bruce in it and he loved them. Sean Pertwee the second. After the double photo with David Mazouz had ended, we went back into the same room for solo pictures. (After Sean we also met Drew and Robin in this same room. I guess the photographer and the guy who collected the photo tickets knew me well by the end LOL)
I started simple and asked if I could get a hug. Wanted to slowly work my way up to more crazier poses.
My friend was before me and she had the same shirt like I, only in blue. When he saw her he exclaimed "I love that shirt" and she got the pose with him pointing at his image on it. 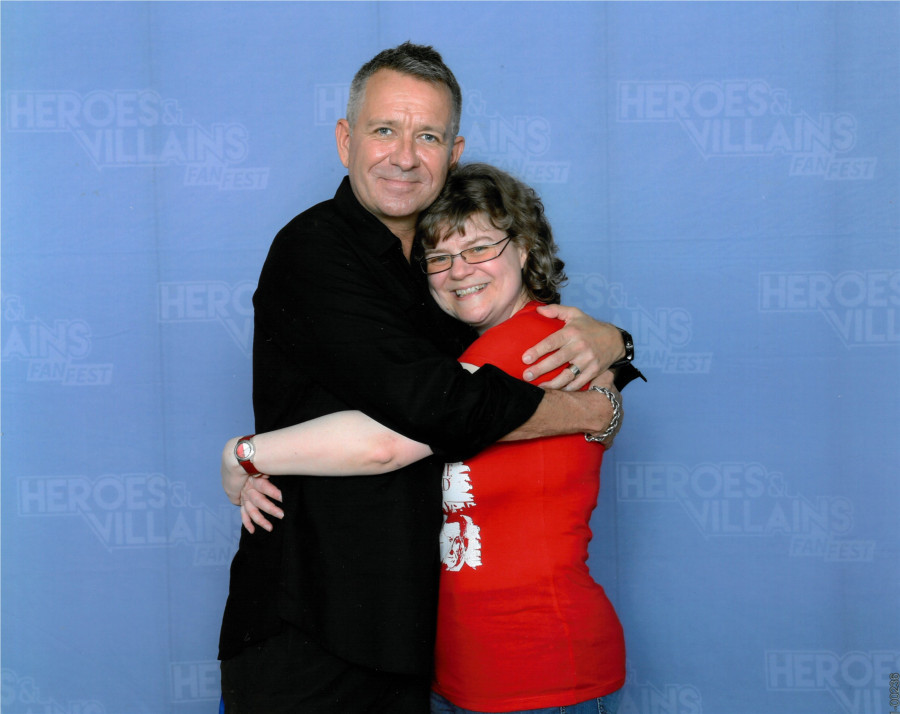