I just remembered something about the Stuttgart con that nobody has told yet. I think. I hope I am allowed to ;) I actually wrote it down as it was so hilarious.
John told the story from "Children of Earth", where Ianto dropped the concrete cube and then Jack is standing there naked. And he had women sanitary pads taped to the soles of his feet so they would not get cut in the rubble. He asked us what that word means in German, and everyone shouted "Binden". So he continued to tell his story in a mixture of English and German: "So I was walking with zwei Binden on me Fuss... and with water Bindens get bigger!"
We all were cracking up at the time including him, and he said he'll never forget this word now.

To have this post not without a picture, I am adding my sandwich with John and Stephen, done in May in London. When I declared that I wanted a sandwich, John said he loved sandwiches. Stephen did not say anything ;) 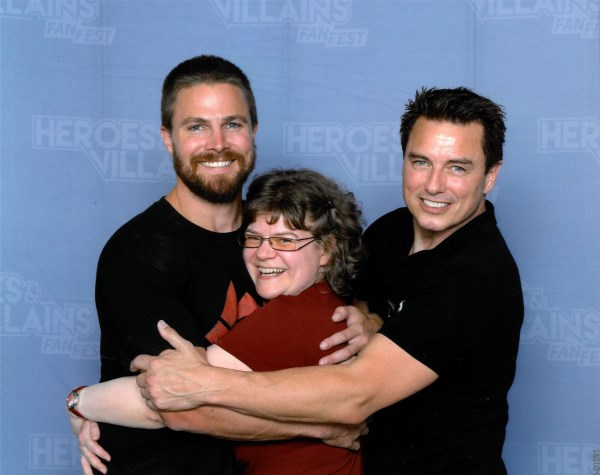