These were made last year and given to Sean Pertwee in a convention fanbook, but I never posted them online as it didn't feel right with the London Bridge attack at the time. 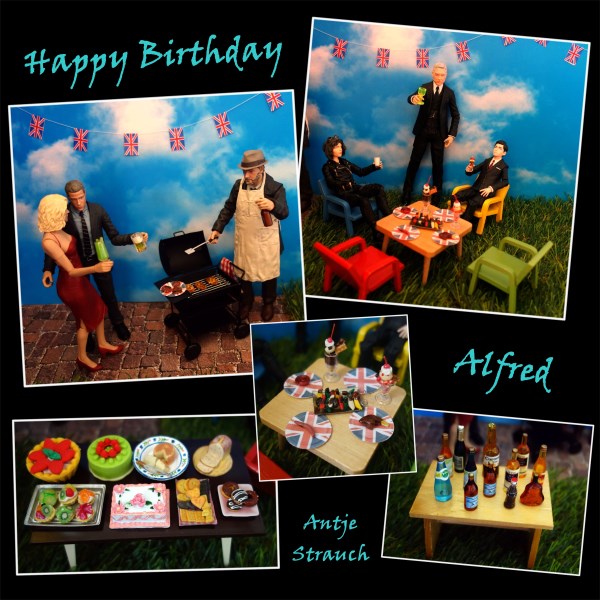 Let me tell ya, a dress is much better suited for hot convention days! I had intended to only wear it for the photo session but ended up walking around like that all Sunday long, and did not sweat once. I may have to rethink the jeans/fanshirt combo!
I asked for a prom picture, I already did that last year with John Barrowman. So, who did it better? 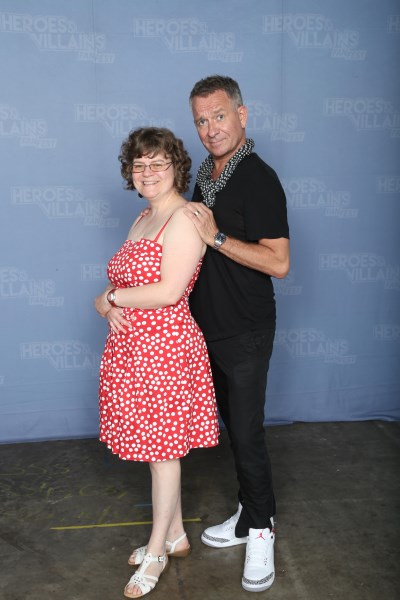 And then I asked for a dancing pose! 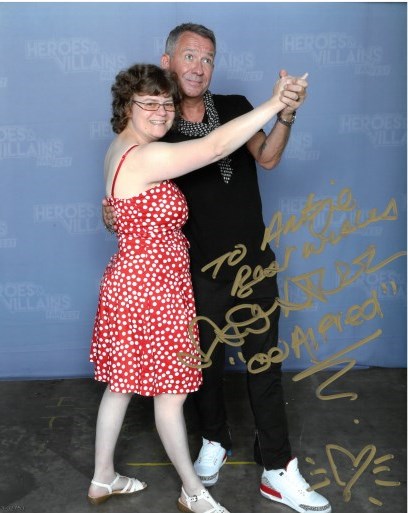 So here is for everyone who wants to know how I managed to fly to London after all, although it did not look good at first.

On Tuesday afternoon they found an unexploded 250 kg British WWII bomb nearby where I live. On Tuesday evening I went down this exact street by tram without noticing anything out of the ordinary. On Wednesday morning I wondered why I didn’t have my daily newspaper delivered. Phoning them, they told me about the bomb.

I tried to get to work that day, but gave up after half an hour. Everything was closed, they had started to evacuate the people living in the area in the night. Luckily I was outside that radius, but the one street that was still open was traffic jammed with all the trams and cars. Would have taken me hours to go to work.

I figured, better to stay at home and pack the suitcase. Instead I was glued to the news all day long.

At around 10 AM they finally had emptied the area and started with disarming it. We get a bomb every year, it only takes a few hours usually. But this one was more tricky and deemed too dangerous. Trucks had to come and bring bricks and a wall was erected and other materials to prevent from stuff flying too far in case of explosion.

At 10 PM another try, this time with a robot. I had my window open and heard a bang, but it was not over yet, now the whole thing was burning and they couldn’t get close enough to quench the fire. I went to bed. Poor evacuated people had to sleep outside their homes a second night. They feared for their pets which they had left. Also on Twitter free beds in families were offered.

On Thursday morning no news – still burning, still the air space over Dresden was closed. This was the day I wanted to fly. I called the Lufthansa hotline, asking if it wouldn’t be better for me to go by train to Frankfurt, to get my 2 PM flight to London from there. But they said I am not allowed to board the second flight if I don’t take the first.

So I got a Taxi to the airport. We managed to squeeze through the traffic jams, but of course my 11 AM flight was cancelled. But I figured the airport would be more help than the hotline. I stood in line for two hours, finally reached the desk at 11.30 AM.

I got told to put my suitcase onto the belt. I was confused as it didn’t look as if I was flying today. But the lady was confident and booked me onto a flight that was supposed to start in Dresden at 2 PM. I should have demanded a train right there and then, my biggest regret.

My suitcase was taken away, and I also had gotten a voucher for something to eat and drink. I got this and went back right into line, figuring if the new flight was cancelled as well, at least I already had saved one hour of waiting time. Half an hour later it was cancelled. Go figure.

This time it took me only one and half an hour to reach the desk again. This second line is when the picture for the newspaper was taken. A different lady this time. Didn’t want to go again to the other anyway. Now I got a train, but was told this one only goes till Frankfurt Main Station and I’ll have to see how to get to the airport from there. The train was supposed to arrive at 6.35 PM, boarding was at 7.30 PM, plane supposed to start at 8 PM. There was another flight at 9.30 PM, but I chose the 8 PM one, thinking if I don’t make it they still can book me at the other.

But first I wanted my suitcase back! Oh no, she said, I would not get that here, I had to walk over there and get it. Which I could have done in the past hour already if someone had told me. And when I came there, even though there was a person it was not the right person allowed to give it to me, even though I could see it standing there right behind the window. I admit I started to panic a bit because the train was not waiting and I still had to go to the station first!

Luckily it took not much longer and off I went. Also luckily the city train from the airport to the station at least was going again, it had been stopped yesterday as well.

So I reached the train and then had a lovely train ride where I talked with a guy from the Netherlands who had been to Dresden on a business trip but promised to come back with his wife for sightseeing. He also had a small notebook where he looked up news about the bomb, and about Frankfurt airport to help me get to my plane in time.

We also got the news that at 5 PM they finally deemed the bomb safe and air space was opened. I still was happy to be on the train, because who knows if and when I would have flown from Dresden that day in all the chaos. They can’t all start at once, if they even have planes to fly with in the first place.

Turned out the train actually WAS going to the airport which was a relief. Not so good was that we were supposed to arrive at 6.55 PM. In the end we were 5 minutes late so I arrived at 7 PM.

Remember my boarding time at 7.30 PM? And I still had to chuck off the suitcase, go through security and passport control. I started to run, also the guy on the train had told me that you need to give your suitcase one hour prior to flying, otherwise it was too late. Maybe I should have taken the later flight?

I reached the desk five minutes after 7 PM, I cut the line, I begged the lady to take my suitcase. She did. Thank you!

Then I ran again. Asked and was allowed to take the short line through security and arrived at the gate at 7.30 PM sharp.

Now it started to get funny. Back in Dresden my ticket said it was gate B25. The guy on the train said now it was B24. The lady that took my suitcase said it had changed to B30 now. And just when I arrived they announced that we should go to B20 instead.

Then we sat there, nothing was happening. Turned out the plane had not even yet arrived from Munich. More waiting, they let us out again to grab a bite to eat and a coffee. Flight time several times got pushed back, I got the news on my phone. Suddenly a group of people stood up at once and started to walk. I wondered as no boarding had been announced over the speakers. But in the next second it came: “Ladies and gentlemen, we have managed to yet again change the gate…” Now they sent us to B22, and at half past ten we were finally in the air.

I wonder if the 9.30 PM flight was on time, or if that started even later or not at all.

But it took them only one hour this time to go to London. I was just happy that I arrived the same night, and had not to sleep in Frankfurt and take a plane in the morning, as my friends were waiting for me and we already wanted to get the convention tickets on Friday when the lines are not as long.

On the way back there was a thunderstorm which prevented the plane to arrive from Frankfurt in London, so when we finally arrived in Frankfurt we were one and a half hour late, but this time I did not need to run as I had still enough time to get my connection. Others were not so lucky.

Hearing the news about Hamburg airport yesterday which had to completely shut down because of a power loss, I don’t think I will fly anytime soon again.

Press picture of me waiting in the airport line. If you know me you will find me in the middle somewhere. Not my best pose!