alumfelga is in "Stranger Things" mood today this is the perfect day to post my picture with Chief Hopper aka David Harbour!

Originally I had tickets for Heroes & Villains at the Olympia in May in London, just like the last two years, where I met all the "Gotham" cast, especially Sean Pertwee. But this year there was a lot of upset, we did not get any news, barely any announcements and finally the whole thing was cancelled, ah I mean postponed till next year. But I was in London anyway as I already had that theatre ticket with Tom Hiddleston.

Someone mentioned that the same weekend is also MCM Comic Con in the Excel Center. I looked it up and the first guest was David Harbour. So I just switched cons. It's a big con, not so much actors but games and other things, even a whole hall with Japanese food and I played with LEGO when I did not have anything else to do. Very relaxing con for me, as I really only was there for David Harbour. They also had Stephen Amell and Misha Collins and also the Winter Soldier guy, just to give you an idea.

I gave David a book with my Stranger Things action figure photos and he looved it. I even had the time to explain it a little, he talked with everyone. Then he asked me where I was from and I said Dresden. He automatically went on to the next small talk question and started to ask whether that was a huge place, then he caught himself and said, of course he knows Dresden, from the book "Slaughterhouse 5". So I told him how beautiful our city is and the next day actually took my netbook and showed him a picture of the skyline with the river and the steamboats and he said it's beautiful and now he wants to visit ;)

And I showed him the "Stranger Things" novel that I had gotten in Forbidden Planet, it literally had just come out a day before and he said he had heard about it but not read it yet and that I now knew more about Hopper than himself.

Very friendly guy, would love to meet him again! I also saw some Eleven cosplays and also some Hoppers but sadly never at the right time to ask them for a picture. I loved especially one that also had the blue jacket from season 2, he had the right stature but my hands were full with Japanese food at the time and he walked by quickly going somewhere. I never found him again in the crowd. But I got a picture with the black guy from Hawkins Police which is something.

Oh, and as for Sean Pertwee? There was a German convention in April which had lots of "Gotham" guests including some I had not met before so I went to that instead. All worked out well in the end. 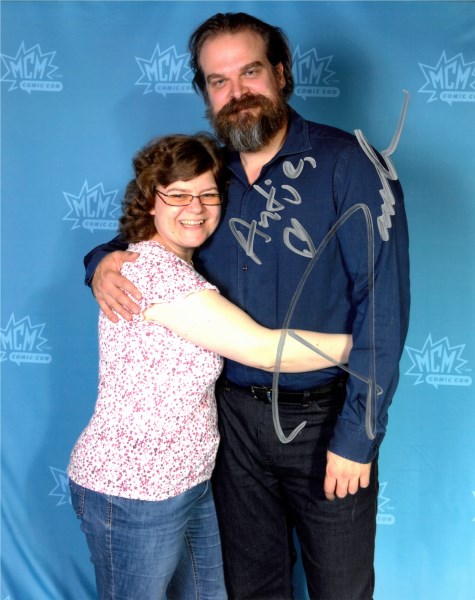